Students from “American Environmental History” write “Place Papers,” in the fashion of William Cronon’s assignment. The challenge of the essay is to bring a fresh, historical perspective on a landscape familiar, even dear, to students. Some of the student work has been published in Bucknell’s student journal, Eidos.

In this series, we share short reflections on those special places that drew us into environmental humanities. Please join the conversation by leaving a question or comment below. 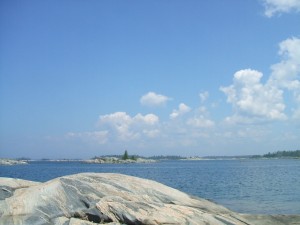 The Georgian Bay is sometimes called the sixth Great Lake, because it’s as big as Lake Ontario and only partly separated from Lake Huron by the Bruce Peninsula. Like all the Lakes, it was shaped by the advance and retreat of glaciers tens of thousands of years ago. The ice shaped the lake beds and scraped the surface down to billion-year-old granite bedrock, now exposed in the form of thousands upon thousands of islands and jumbled interior in Ontario’s near north.

What grows here, especially along the shore, is tough, scrubby vegetation like juniper, oak and cedar, and most famously, the white pine. The colour (sorry: Canadian spelling) comes in the sheltered bays, in pink gneiss, cardinal flowers and Indian paintbrush and sumac, water lilies and Queen Anne’s Lace, pickerel weed and Joe Pye weed. The sounds are of water lapping, boat motors, and wind in the pine branches. The scent is of fresh water and pine needles baked in the sun and creosote from old crib docks. The poet Douglas LePan captured it perfectly:

Abrupt granite rising from the clearest
water in all the world.  Crowned with a tangled diadem
of blue green foliage…
And always beneath birdsong the sound of water.[i]

I have visited the Bay since I was a few months old, and I grew up surrounded by people who loved it as a heaven on earth. This photograph was taken on a day’s canoeing with my dad. We had just come through a narrow passage known as “Hell’s Gate” (it’s really not that bad), and stopped for lunch at the tip of Moose-Deer Point. To me it captures everything I love about the Bay: hints of the crevices and secret waterways through rock, but with a view to the open; pine and lichen and pink granite; water always in movement.

The Bay has a fascinating history. European explorers like Samuel de Champlain learned of longstanding patterns of travel, fishing, and berrying by Algonquin and Huron nations. Champlain called it la mer douce (the freshwater sea), and hoped it led west; the British military hoped it could be kept from American incursions. By the nineteenth century it was one of the great lumbering regions of North America. But as the pine and fish were thinned, others saw in the Bay another desirable frontier: a rough and romantic “wilderness” for camping and cottaging. Now the Bay confronts several environmental concerns common to the Great Lakes: invasive species, dropping water levels, balancing public access.

Why study a place like the Bay? Because it tells us a great deal about our historical relationships with nature. Scientists read biological proxies to understand environmental change; humanists read many other kinds of records. French and British cartographers tried to map the uneven coastline as part of their strategic contest for the interior. Canada’s best-known artists, the Group of Seven, painted the Georgian Bay as the quintessential northern and national landscape. Travel accounts and poetry, shipwreck ballads and oral histories, all reveal in bits and pieces what different people thought about nature and how they used it. Government records from all three levels of government in Canada – departments of Indian Affairs, National Parks, Fisheries, Lands and Forests – show how we have tried to manage nature and the effects this has had. Material artifacts tell us about land use as well, from sunken logs next to old mill sites to generations of cottage architecture.

These are very different kinds of sources: impressionist and documentary, textual and visual, expressed in high and popular culture. But we experience – evaluate, make sense of, rearrange, appropriate – nature in so many ways simultaneously. And if we are to really address environmental degradation or sustainability, we have to incorporate the study ofpeople.

The land itself is an artifact of human agendas and human actions. But our history is also profoundly affected by where we are: “No cultural activity occurs exclusive of the environment required to sustain it.”[ii]

Our history, our society, and our environment are all products of that moment of meeting between what we bring to a place and what we find there.

Our history, our society, and our environment are all products of that moment of meeting between what we bring to a place and what we find there. A littoral refers to a shoreline, a transitional zone between water and land. It suits the Georgian Bay, but it also applies more generally to how environmental historians think. For us, both landscapes and human history are littorals: sites where we see human and nature confront one another, and the stories of negotiation, adaptation, and transformation that result. But it is also a way of studying places we love, and want to see thrive.